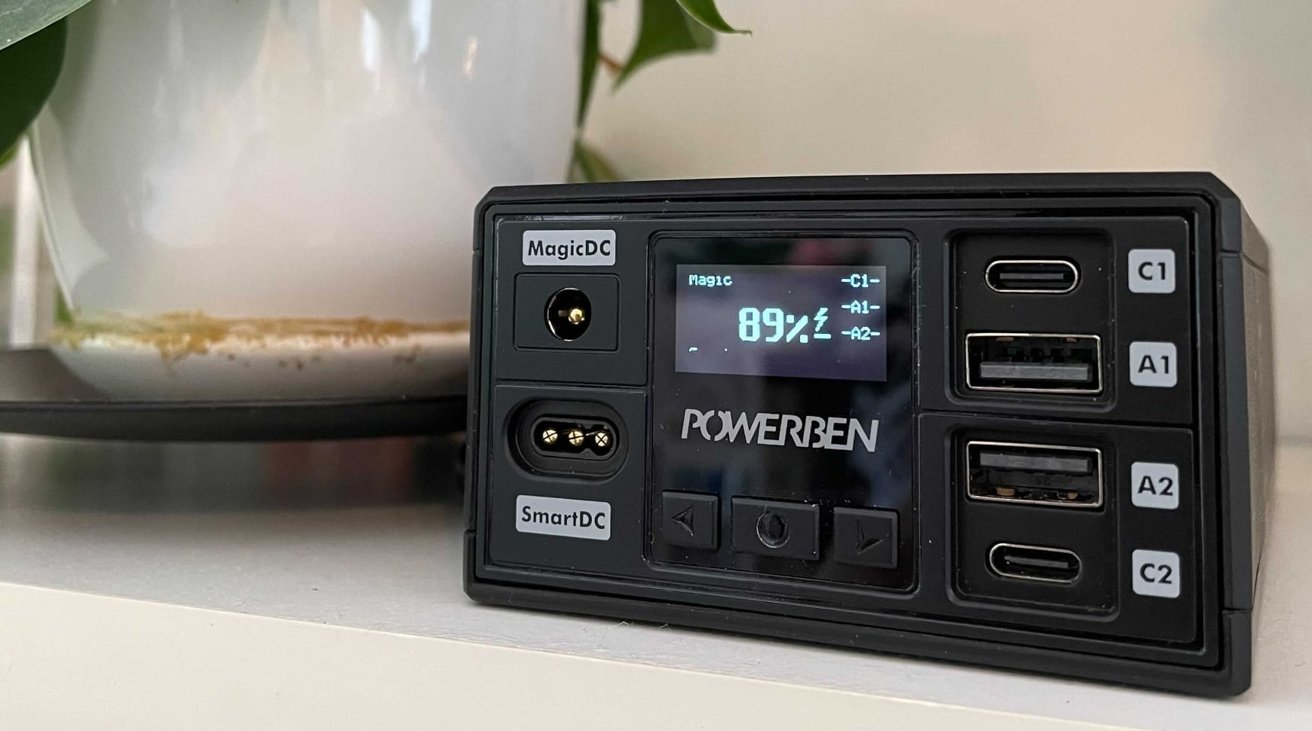 PowerBen has created a massive 40,200mAh battery with 200-watt USB-C Power Delivery, one that is utilitarian in its appearance and design but extremely handy when it’s needed.

PowerBen claims to be making the world’s first 200-watt USB-C PD portable battery. Such claims are always difficult to prove in practice, but this battery is unique in that it can charge or power almost any kind of accessory you can think of.

To illustrate this, PowerBen demonstrated by running a 48V DC chainsaw from the battery, and had six of them running an inverter to power a 1,500W microwave oven.

The batteries have 2 USB-C ports for input/output, 2 USB-A ports for output, and 2 ports unusually named “MagicDC” and “SmartDC”.

MagicDC uses a common barrel connector, can be set to be an input (recharging the battery) or output (powering something else). It can be configured to output anywhere from 5V to 25.5V, at up to 5A.

SmartDC supports 360W of direct output from 9V to 24V, and up to 10A. SmartDC input could recharge the battery from an MPPT compatible solar panel charge controller, for example.

There are two models of battery available, one in a 40,200 mAh capacity, and one in a 24,000 mAh capacity. What’s the difference? Functionally, they work the same, but the lower capacity is approved for airline travel.

Why would you want this as an Apple user?

It’s probable that you’re not interested in powering a chainsaw or microwave oven from a battery pack. That’s fine, too.

You can charge a 16-inch MacBook Pro or two, with its 2 USB-C PD ports that get 100W each. This is more than enough because the stock Apple power adapter is a 96W unit.

If you’re using an iPhone and don’t have USB-C lightning cables, you could use either of the 2 USB-A ports, which charge at 25W. If you have an iPhone 11 or iPhone 12, and use USB-C, you could recharge up to 11 times using the large 40,200mAh battery we tested.

As an Apple user, you’re probably less concerned about charging all the things than charging all your Apple things. Even though the review unit arrived with adapters for many different HP, Dell, Lenovo and other laptops, we were able to also charge a 2014 MacBook Pro and 2015 MacBook Air using MagSafe 2 adapters.

Recharging and the interface

More than that, it’s not just about how many charges you can get out of the battery, but how quickly the battery itself recharges. You don’t want to wait around forever charging a giant 24,000mAh or 40,200mAh battery.

The PowerBen has fast power input, either from USB-C PD, or the DC barrel labeled “Magic DC”, and connects to a car charger, solar panel, or a compatible wall power supply. It’s possible to charge the PowerBen battery enough to charge an iPhone 12 fully within just 3 minutes. 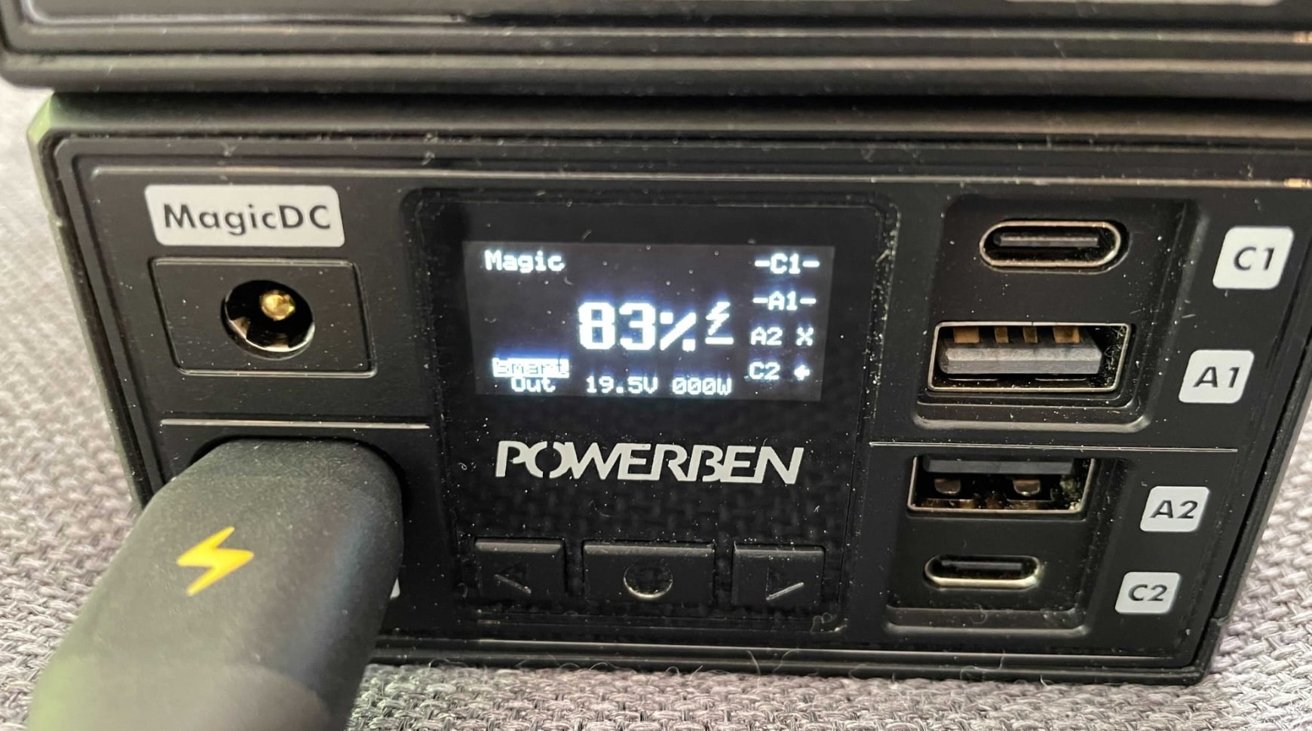 All the ports are clearly labeled on the front, and are joined by a detailed display.

The user-selectable nature of using one port for both input and output means there’s got to be a user interface.

The user interface consists of a screen and three buttons, left, action, and right. The user enters menus using a long press on the center action button, left or right to move through the options, and long press to confirm.

Why would I want to charge using two or more batteries?

By now, you probably understand that PowerBen has set out to charge or power nearly any kind of device. One of the unique functions it has is the ability to chain multiple batteries together in a stack.

When you’re using the PowerBen to charge a MacBook or commonly used electronic devices (less than 360W), a single battery pack will be fine. But, if you need to provide power to something like an e-scooter, it may need a 400W input, more than one battery is capable of providing.

If each battery is 360W, you would require a second battery to meet 400W, which can be achieved using the stack function. When you use 2 PowerBen units in parallel, they support up to 500W output, rising to 750W output if you stack three units. 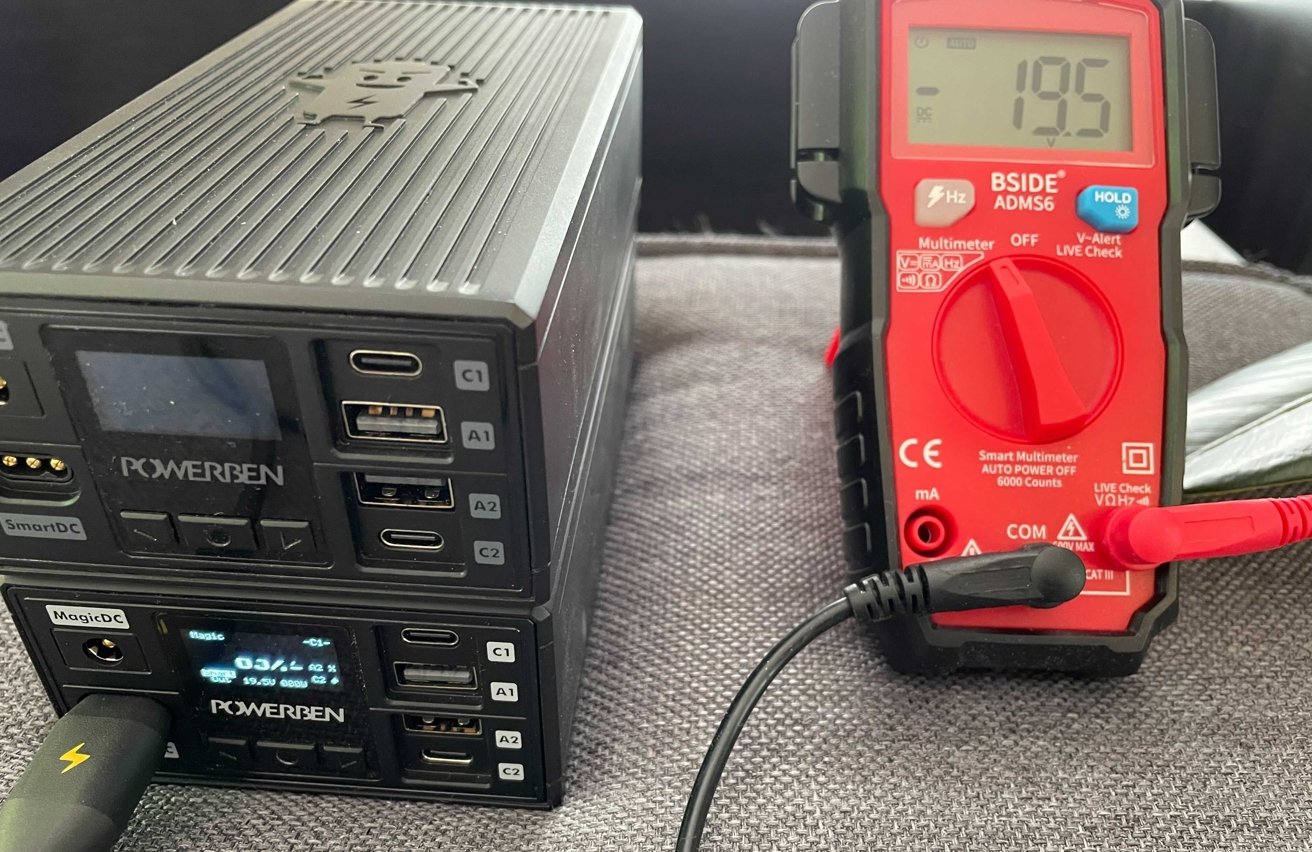 You can easily stack two units together and combine them for a larger power output.

This is extremely useful in an emergency where there is no access to electricity, especially if you have an inverter.

PowerBen has two inverters. One is meant for two remote workers with laptops, phones, and perhaps electric fans. The second inverter is the more serious 1500W inverter meant for running appliances.

The inverters connect using the SmartDC cable, so that they can take advantage of the full 360W of power.

There are powerbank batteries on the market with USB-C PD. You can find them in 20W varieties, and even up to 100W. Most of the time, they stick to a capacity around 24,000mAh so that they can be used for air travel.

If you want to charge anything and don’t anticipate flying, finding a 200W USB-C PD in 24,000mAh is hard enough, and acquiring one with a 40,200mAh capacity is very difficult. Finding them stackable with inverter capabilities is extremely rare. 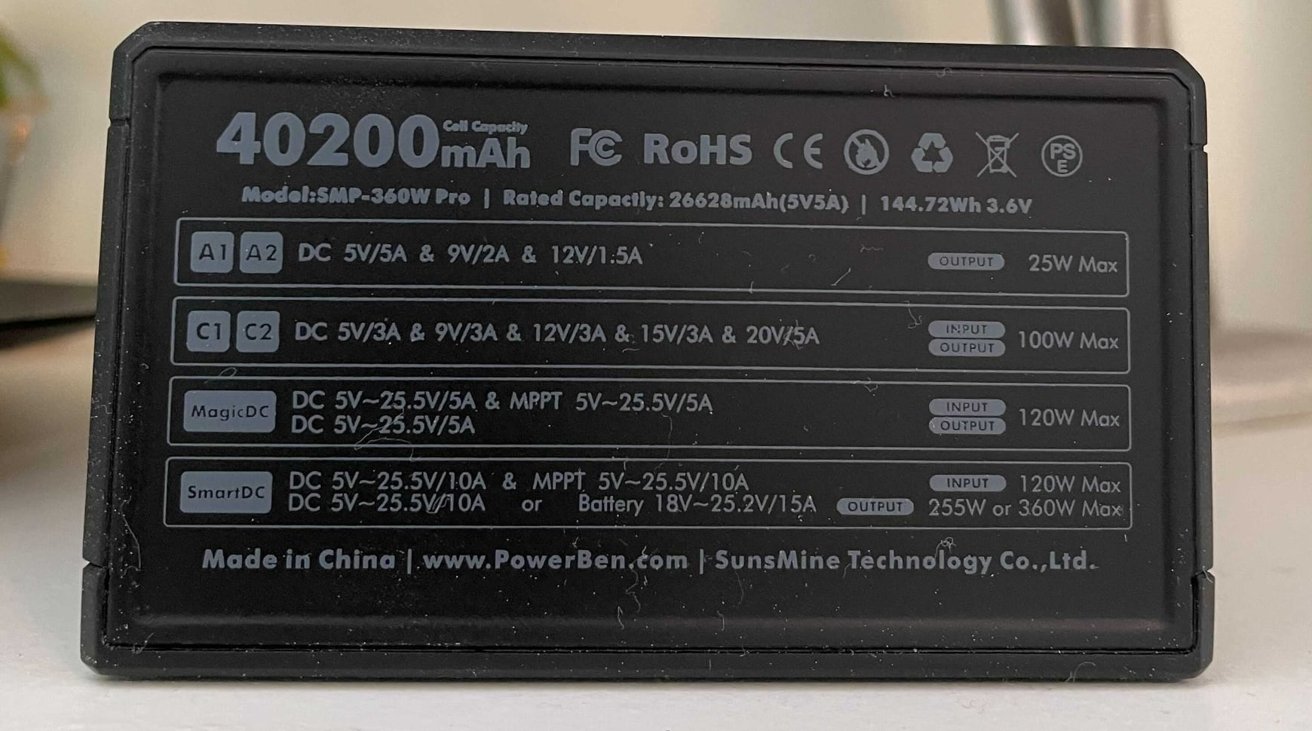 The rear of the PowerBen includes the regulatory information and lists the capabilities of each connector.

To be very clear on whether or not this battery is for you, the best analogy to give involves power tools.

If you were to go into your home DIY store, you will find tools targeted at the home consumer. They might have plastic enclosures, with pretty colors, orange, black, yellow, or even pink.

These are not serious tools, like the ones used by contractors working on job sites. Sure, you might use such a tool in the house and do fine with it for occasional uses, but a serious tool sold to contractors is going to have more metal in it, cost significantly more, and have far more torque.

It is also unlikely to be offered in pink or purple.

The PowerBen is like the contractor’s grade battery – it’s serious, so the design is considerably more utilitarian than your magenta/aqua green/black battery. If you’re that serious user, this might be a 4-out-of-5 or 5-out-of-5 product for you.

If you’re a consumer user who wants all the power USB-C and USB-A can provide and never need to think about stacking batteries, or running appliances, it will get you through days-long power outages. But still, it’s probably more complex than you would care to think about when it comes to SmartDC or MagicDC.

The configuration we tested is the PowerBen Duo, a 2-pack of the 40,200 mAh units, at $439. You also need to add the cost of any cables you may need, whether it’s a pack of laptop adapters, car charger, or either of the inverters.